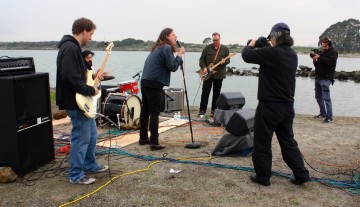 ALBANY — For what it’s worth, the cops came up to the roof of Abbey Road Studios in London in 1969 when the Beatles recorded a brief concert for the movie “Let It Be.”

Fast forward 45 years. Oakland band Musk had just finished a similar live performance before the cameras on Dec. 9 on the shore of San Francisco Bay behind the grandstand and parking lot at Golden Gate Fields when several East Bay Regional Park District police officers drove up. Much like the Beatles’ concert, nothing came of it. Whether Musk’s show will be seen by millions, well, we’ll see.

The 30-minute show was broadcast as a live stream by a new South San Francisco company called PressureDrop.TV, which is looking to give small- to medium-sized bands a way to get more professionally produced videos online.

A small crew set up to record Musk on the afternoon of Dec. 9. Two cameras filmed the action while two other crew members worked the video and sound boards. A generator powered all of the equipment, including the band’s amplifiers and monitors.

The sky was overcast, but the rain held off. On the dilapidated pier that served as a backdrop, a lone seagull perched, watching the band unleash its bluesy, sludgy brand of garage music.

The band chose the location for the shoot because of the Albany Bulb’s history of being a home to an arts colony for many years.

“I was actually thinking of deep into the Bulb,” lead singer Rob Fletcher said. “I wanted it in the jungle. I wanted the arts and camps and stuff. I like it out there. I like the art. I like the underground, seedy underbelly of Albany.”

Dragging all of the necessary equipment down the Neck and onto the former garbage dump would have been an issue, however. So the band set up instead across Albany Beach from the Bulb. During the show, Dan and Taz, a man and his dog on a walk, stopped to take in the show for a few minutes.

Despite the open air, the sound was good. Anne Cook of PressureDrop.TV said there was a slight issue with syncing the video and sound when the band was playing live, but that the problem was fixed for the archive video, available on Vimeo at vimeo.com/album/3167707.

A security guard checked on the band and crew setting up and, according to the musicians, seemed to be fine with the shoot. However, about 10 minutes into the concert, an employee of Golden Gate Fields came down and informed Cook that Albany police had been called.

A police SUV drove into the parking lot and parked next to the ticket windows before leaving. An Albany Police Department spokeswoman said the APD responded to a noise complaint and determined the concert was taking place in the EBRPD’s jurisdiction and passed it on to the park district. EBRPD police arrived after the show was over and, according to a spokeswoman, decided no action needed to be taken.

Cook said about 100 people watched the concert live and another 500 have watched the archive. When asked if those were good numbers, Cook said, “Definitely. Here’s the thing. This is not Arcade Fire. We’re picking bands that are new.”

Cook said PressureDrop.TV would like to see maybe one live stream a week in the future.

“I want to put ourselves where we are a place that is sort of a rite of passage for bands,” she said. “If we can be a place where people can check out new and emerging bands, that’s what I want to get to.”

blog comments powered by DISQUS back to top